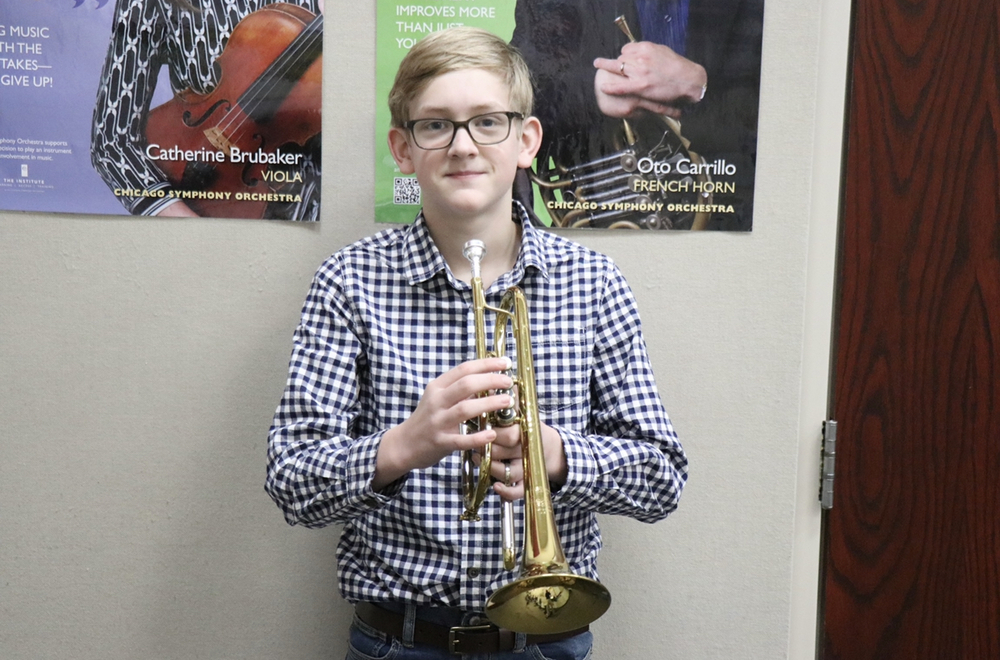 When Hellstern Middle School seventh grader Silas Wilson performed a trumpet solo on video to enter national competition, he had no idea what the results would be. Silas and everyone who knows him were amazed to discover he is one of 17 National Semfinalists in the Junior Division and he will be performing in Philadelphia in March.

“My selection was the Hansen Sonata OP 18,” Wilson says. “My dad (Christopher, professor of trumpet at Arkansas State University) sent me a text about the competition and I followed the instructions on the website. It was cool to get the results. I never thought I would be one of the best in the nation.”

“This is my 11th year at Hellstern and 17th year in music education and Silas is light years ahead of anyone I’ve ever taught,” Huffman says. “That’s saying a lot. Some of my former students are serving in education. Several have doctorates. But, Silas is ahead of them all.”

How long has he been playing?

“Since I was nine,” he responds. “My dad got me started. I like learning new songs and practicing. When it sounds good, it shows that the hard work pays off. Music is my favorite thing. I really like the music program at Hellstern. I hope music is a big part of my future.”

Huffman is sure music will be a major part of Wilson’s future.

“As a seventh grader he just made all-region and was first band, third chair while competing against eighth and ninth graders,” Huffman says. “That accomplishment and reaching the national semifinals in trumpet are the highest achievements ever by a band student at Hellstern.

“Silas deserves the honors. He has a strong work ethic and uses every opportunity, in school and at home, to practice and get better. Plus, he’s a strong, quiet leader in our program. He is quick to help other students. When you mix his God-given talent with his hard work and dedication, the results are incredible. This trip to Pennsylvania is a great opportunity for him.”

His mother, Star, and father will be in Pennsylvania to support Silas. The competition is actually in Mechanicsburg, very near Philadelphia. The event is March 20-21. Silas plans to utilize the same music that earned him a spot in the final 17.

As amazing as his accomplishments already are, Silas isn’t even in junior high yet. He’s looking forward to playing in the marching bands at Central and Har-Ber. Even in Pennsylvania he will be competing against older students.

“Silas will be ready,” Huffman assures. “He is a once in a lifetime student.”