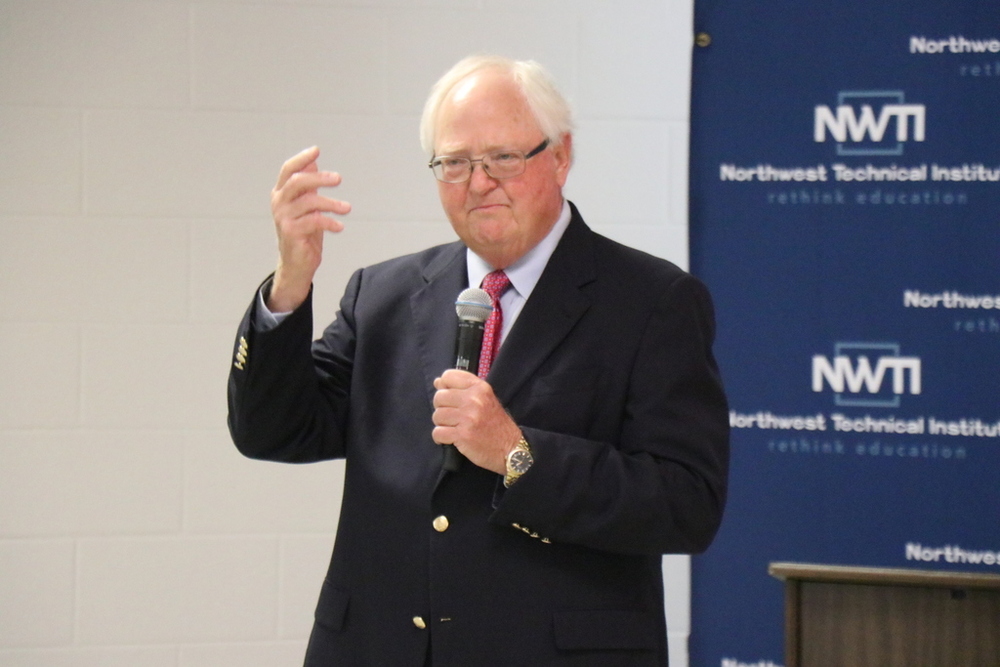 After 38 years as Superintendent of Springdale Public Schools, Dr. Jim Rollins has resigned to accept the position of President of the Northwest Technical Institute. Dr. Rollins’ letter of resignation was accepted by the Springdale School Board Tuesday, June 2. He was announced as President of NWIT Wednesday, June 3.

Dr. Rollins joined the Springdale staff in 1980 as Director of Secondary Education. Two years later he was elevated to Superintendent. Dr. Rollins’ 38 years is the third longest term ever served by an Arkansas superintendent in one school district.

“Dr. Rollins is a great example of a school leader and community leader who all of us can look up to for the work he has done,” said Arkansas Commissioner of Education Johnny Key. “His work in Springdale is one of the major reasons for the success and growth of Northwest Arkansas. I am looking forward to working with him in his new role and am excited about the leadership he brings to the Northwest Arkansas Technical Institute.”

Springdale School Board President Michelle Cook added, “For almost 40 years Dr. Rollins has built a legacy at Springdale Public Schools that includes growth, innovation and excellence. Businesses have been quick to partner with his new ideas in order to bring the very best to our schools. His vision of ‘Teach Them All’ has become a way of life in our district.

“Because teachers and administrators have grown to be the best in the state under Dr. Rollins’ direction, I am confident he has prepared all of us for the next step. Dr. Rollins’ experience collaborating with businesses, guiding educators and leading in innovation makes him uniquely qualified to excel at leading NWTI.

“I look forward to the partnership between NWTI and Springdale Schools to help prepare our students for the workplace. I am thankful for Dr. Rollins and the mark he has left on me, my family and thousands of others.”

Since he has been Superintendent, Dr. Rollins has overseen construction of 22 schools, including the Don Tyson School of Innovation where most of stage two will be completed by the beginning of the fall semester, effectively doubling the school’s capacity to over 2,000. The DTSOI is the first school of its kind in Arkansas and there are few like it in the United States.

Among Dr. Rollins’ accomplishments and honors since he has been in Springdale are:

*Received 2020 Outstanding Alumnus Award in Education from the College of Education and Health Professions, University of Arkansas.

*Named Administrator of the Year by the Arkansas Communication and Theatre Arts Association, 2018-19.

*Honored at “Leaders to Learn From” event conducted by Education Week magazine in Washington, D.C., 2017.

*Presented the 2016 “Excellence in Education Award” by the AdvancED organization.

*Featured in Money magazine as one of 50 “Money Heroes” across the nation for efforts to promote economic education in the public schools.

*Represented Arkansas on Governing Board of the American Association of School Administrators, 2014-17.

*Member, Board of Directors of Springdale Chamber of Commerce.

*Past President, Board of Directors, Rodeo of the Ozarks.

*Honored as one of “40 Years/40 Leaders for Arkansas by the Winthrop Rockefeller Foundation, 2014.

*Recipient of Humanitarian Award presented by the Northwest Arkansas chapter of the National Federation for Just Communities, 2009.

*Received “Friend of AAGEA” Award from the Arkansas Association of Gifted Educators, 2005.

*Was Arkansas’ representative in the U.S. Dept. of Education’s “Superintendents Task Force” regarding the No Child Left Behind initiative.

*President of Arkansas Association of Educational Administrators, 2003-04; member of the AAEA Board of Directors, 1987-2020.

*Alumnus of the Decade, Arkansas College at Batesville, 2000.

*Past President, Arkansas Association for Supervision and Curriculum Development.

*Past President, Board of Directors of Northwest Arkansas Education Service Cooperative.

*Member of the Arkansas Department of Workforce Education advisory board on the High Schools That Work network (formed in 2002).

Dr. Rollins earned his bachelor’s degree with honors from Arkansas College in Batesville (now Lyon College). He earned his masters of education degree, his specialist degree in secondary administration and his doctorate in educational administration from the University of Arkansas.